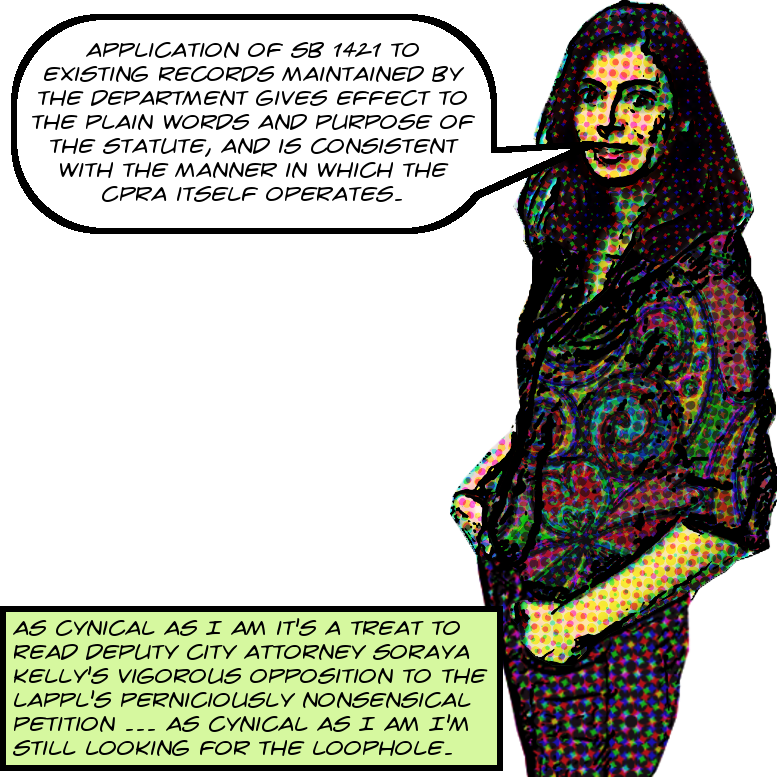 Last week in the appalling lawsuit filed by the appalling Los Angeles Police Protective League seeking to prevent the LAPD from releasing records newly made public by SB1421, the City of Los Angeles filed a surprisingly unappalling opposition brief arguing that the records ought in fact to be released.

The LAPPL’s lawyers, Rains Lucia Stern St. Phalle & Silver, have been filing these lawsuits all over Southern California, and so far they’ve managed to get injunctions against releasing the records in San Bernardino and Orange Counties as well as, of course, in the City of Los Angeles. I thought I heard somewhere that not every government has opposed these suits, but I can’t verify it, so forget that! But, as I said, the City of L.A. did file an opposition, and you can find a transcription of selections below.

You may recall that the LAPPL’s argument is that it’s unfair to apply the law retroactively because officers made career decisions based on the confidentiality of these records. The City of Los Angeles, in response, says that releasing the records would not in fact be retroactive application because the law applies to records that the City has in its possession now.

They also argue that it wouldn’t be a retroactive application of a law because it doesn’t change the consequences attached to the actions of the officers related in the records. They argue that releasing old records was the intention of the legislature, and finally that the legislature does have the authority to change privacy protections that apply to existing records.

Here’s the opposition brief, and here’s the transcription of selections:

This Court should deny Petitioner’s request for permanent writ relief. The text and purpose of the relevant statute – Senate Bill (“SB”) 1421 – obligate the Los Angeles Police Department (“Department”) to disclose the records specified in that law in response to a properly drafted California Public Records Act (“CPRA”) request, absent an independent statutory basis to withhold those records.

LAPPL argues that SB 1421 should be interpreted to apply only “prospectively” to Specified Records concerning incidents occurring on or after January 1, 2019, and that a “retroactive” disclosure of existing records maintained by the Department violates LAPPL members’ privacy rights.

The most reasonable interpretation of SB 1421, however, would require the Department to disclose Specified Records created before 2019 that it maintains in its possession, pursuant to a valid CPRA request. Four reasons support this interpretation: First, application of SB 1421 to existing records maintained by the department gives effect to the plain words and purpose of the statute, and is consistent with the manner in which the CPRA itself operates. Second, applying SB 1421 to existing Department records does not constitute a “retroactive” application of the statute because disclosing such records does not change the legal effects or attach new legal consequences to officers’ past conduct. Third, the Legislature appears to have intended SB 1421 to allow for the disclosure of all Specified Records in an agency’s possession, regardless of when they were created. Finally, contrary to LAPPL’s suggestion, the Legislature has the authority to enact a statute, such as SB 1421, which modifies privacy protections previously granted by statute.

A. The Plain Language of SB 1421 Supports Application To Records Created Before 2019 and Is Consistent with the Workings of the CPRA .

The objective of statutory interpretation is to ascertain legislative intent so as to effectuate the purpose of the law. (Hughes v. Board of Architectural Examiners (1998) 17 Cal.4th 763, 775; Eisner v. Uveges (2004) 34 Cal.4th 915, 927.) When interpreting the meaning of a statute, parties and courts must first look to the language of the statute, giving effect and significance to every word and phrase. (Eisner v. Uveges, supra, at p. 927; Amaral v. Cintas Corp. No. 2 (2008) 163 Cal.App.4th 1157, 1183; Copley Press, Inc. v. Super. Ct. (2006) 39 Cal.4th 1272, 1284-1285.) Words in a statute are to be given their plain, ordinary, and commonsense meaning. (Amaral v. Cintas Corp. No. 2, supra, at p. 1184; Fredericks v. Super. Ct. (2015) 233 Cal.App.4th 209, 224.) Statutes must be given a reasonable interpretation, with due regard for the language used and the purpose sought to accomplished. (Fredericks v. Super. Ct., supra, at p. 224.) SB 1421 provides that, notwithstanding the traditional statutory confidentiality protections provided under Penal Code Section 832.7(a) and Government Code Section 6254(f), respectively, certain Specified Records “maintained by any state or local agency shall not be confidential and shall be made available for public inspection pursuant to the [CPRA],..(Penal Code § 832.7(b)(1).) The plain words of that provision underpin the proposition that any Specified Records “maintained” by the Department, regardless of when created, are no longer subject to statutory confidentiality, and are subject to disclosure pursuant to CPRA requests received after January 1, 2019.

A closer look at the wording of the statute supports this commonsense interpretation. In particular, the ordinary and commonly understood meaning of the past tense verb “maintained” is “kept possession and care of.” (Deluxe Black’s Law Dictionary 953 (6th Ed. 1988); see ibid, [defining the present tense verb “maintain” to mean “hold; hold or keep in an existing state or condition”]; Webster’s Ninth New Collegiate Dictionary 718 (1988) [defining “maintain” as “to keep in an existing state”].) More specifically, to “maintain” a record means “to keep [it] in existence,” or to “preserve” or “retain” it. ( Moghadam v. Regents ofUniv. of Calif. (2008) 169 Cal.App.4th 466, 479-480, quoting Owasso Independent Sch. Dist. No. 1-011 v. Falvo (2002) 534 U.S. 426, 432-433.) By using the word “maintained” as a trigger for disclosability, the Legislature intended SB 1421 to apply to all Specified Records that an agency has kept in existence – i.e., that it has preserved or retained – at the time a CPRA request is made, regardless of when such records were created. Had the Legislature intended to make some Specified Records disclosable and keep others confidential based on when the records were created or when the underlying incidents occurred, it could have expressly specified such a time limitation. (See Fredericks v. Super. Ct., supra , 233 Cal.App.4th at p. 218 [rejecting argument that Section 6254(f)(2) of the CPRA did not require disclosure of records more than 60 days old, because the “plain terms” of the statute “do not include an express time limitation on production of only ‘contemporaneous’ or ‘current’ records”].) Because the Legislature did not do so, “[t]here is no basis in the plain language of the statute to read into it any [such temporal] limitation.” (Id. at p. 234.)

Interpreting SB 1421 to apply to records created before 2019 is also consistent with the manner in which the CPRA operates. The mechanics of the CPRA must be taken into account when analyzing how records are to be disclosed under SB 1421, given that the statute expressly makes the CPRA the vehicle by which Specified Records are to be made available to the public. (Pen. Code § 832.7(b)(1).)

It is well-established that “the CPRA requires public agencies to provide access to their existing records ,” where no exemption to disclosure applies. {Sander v. Super. Ct. (2018) 26 Cal.App.5th 651, 665 [italics added]; Bd. of Pilot Commissioners v. Super. Ct. (2013) 218 Cal.App.4th 577, 597 [“The CPRA pertains to ‘disclosable public records in the possession of the agency.”] [italics in original].) Indeed, the definition of “public records” under the CPRA includes records that are “prepared, owned, used, or retained by” an agency. (Govt. Code § 6252(e).) Thus, in responding to a CPRA request, an agency generally must: determine if it has responsive pubic records in its possession; notify the requestor whether responsive, disclosable public records exist; and notify the requestor if any responsive records are being withheld from disclosure pursuant to an applicable exemption. (Govt. Code §§6253(c), 6255(a) & (b); Haynie v. Super. Ct. (2001) 26 Cal.4th 1061, 1072.) The CPRA does not require an agency to retain records for any particular timeframe, or to create records in response to a request; but if an agency maintains public records in its possession, they are subject to disclosure absent an applicable exemption. {Sander v. Super. Ct., supra, 26 Cal.App.5th at p. 666; Fredericks v. Super. Ct., supra, 233 Cal.App.4th at p. 223 [noting that “[t]he CPRA generally presumes that all documents maintained by a public entity are subject to disclosure,” unless an exemption applies].)

Accordingly, both the plain language of SB 1421 and the established procedures of the CPRA support application of the statute to any Specified Record maintained by the Department, regardless of the date it was created.

Image of Soraya Kelly is ©2019 MichaelKohlhaas.Org and is, you know, well, anyway, click here then.