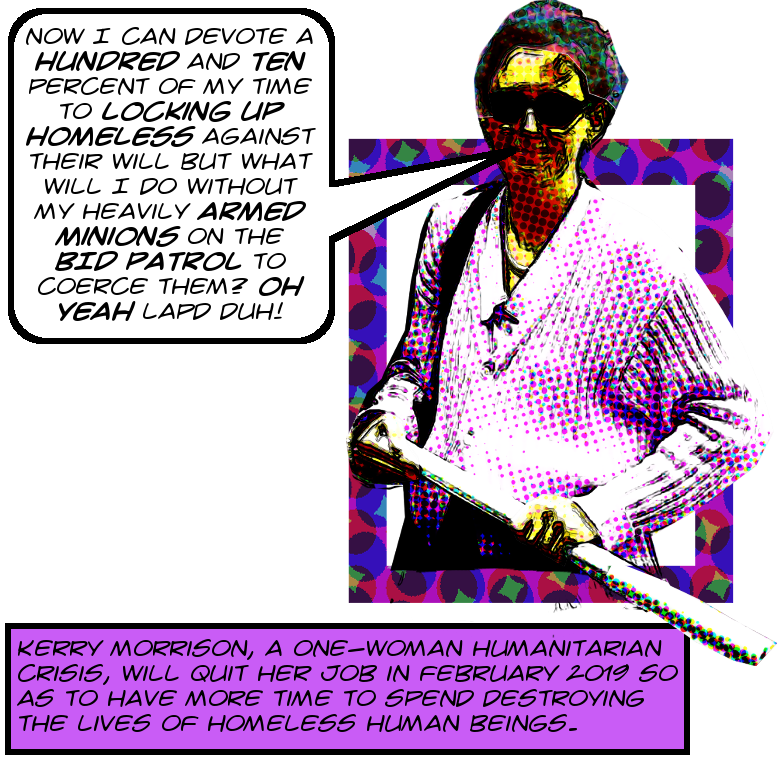 Kerry Morrison, founding director of the Hollywood Property Owners’ Alliance, which administers the Hollywood Entertainment District BID in Hollywood, announced that she’s leaving that position effective February 2019 in order to focus on making it easier for cops to lock up homeless people against their will.

Although she has no background or training in mental health, law, or human decency, and although she has spent the last twenty years being paid to organize tens of thousands of punitive arrests of homeless people and other human beings, she has somehow managed to have herself accepted as a compassionate expert in mental health care issues and presumably whatever she does next will have to do with that inexplicable perception. Perhaps Morrison, oft compared to Leni Riefenstahl, will expand her hobby of making homeless exploitation flicks into a career.

Kerry Morrison, as you probably know, has been one of the untiring forces behind the social destruction of Hollywood over the last two decades. There is literally nothing she’s done that’s improved life for human beings and non-zillionaires in that most beset of the spiritual centers of Los Angeles. Nevertheless, it’s fitting, as they say, to give the Devil her due, or to give Satan her salute. Turn the page for what passes in these parts as kind words about Ms. Kerry Morrison.

Among the BID directors of Los Angeles Kerry Morrison stands out as being the second smartest1 and the third most evil.2 But Kerry Morrison is by no means an also-ran. Her BID is by far the first most Nazi-like. It is really the only one in the City which manages to combine a religious concern with social cleansing with a worshipful attitude towards physical violence and an obsessive fascination with the trappings of power in a characteristically Germanic Hitleresque manner, and this is all due to the cult of personality surrounding Kerry Morrison.

Most of our Los Angeles BIDs are fascists, it’s true, but except for Kerry Morrison’s they all tend toward the thug-infused pigginess of Mussolini’s Italy3 or the bloodsoaked comic opera Marx Brothers schtick of Franco’s Spain.4 Whoever replaces her won’t, couldn’t, possibly be as interesting, as plugged-in, as ruinously focused on social destruction. I’ll miss Kerry Morrison, but purely for selfish purposes as she’s so easy to mock. Her replacement will be a lesser figure in every way, which means nothing but good for the City of Los Angeles.

Image of Kerry F. Morrison is ©2018 MichaelKohlhaas.Org and is somehow incestuously related to this lil friend right here.