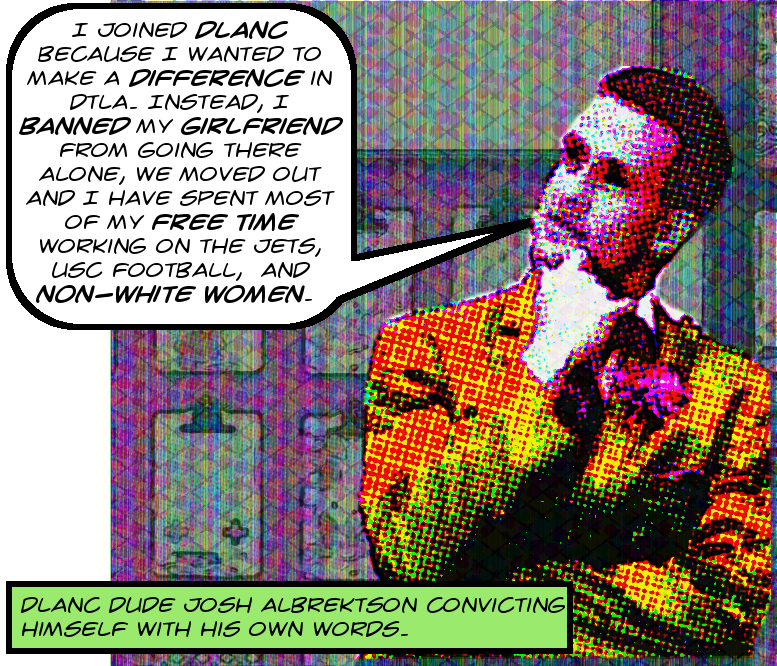 Anyone who follows this blog regularly knows that we’re raking in big bucks from George Soros and similar sources to support our merciless over-coal raking and to-the-duly-constituted-authorities reporting of the propertied classes of Los Angeles and their eager brown-tongued lap-minions like, e.g., the six members of the Board of Directors of the Downtown Los Angeles Neighborhood Council who participated in a sub rosa, barely legal conspiracy to do in the recent Skid Row Neighborhood Council formation effort.

One of the many targets at which we direct this firehose of Sorosbux is the Facebook, where Internet amateurs and malcontents will gather to vent their collective spleens in the comfy company of their moronic six-fingered peers. In particular, we have a dedicated, Soros-funded, intern1 doing absolutely nothing all day but sifting through opposition Facebookery. And mostly it’s predictably dumb and sadly inconsequential, this material. The political equivalent, if you will, of kitten memes. Occasionally, however, a gem pops up in the feed, and when it does, well, we will write about it!

So you can well imagine our glee over here at MK.Org secret headquarters when this little slab of puckey was brought to our attention.2 The author is DLANC board member and erstwhile DTLA resident3 Joshua Albrektson, writing about his actions after receiving the grievance against DLANC board member Dan Curnow that I filed a few weeks ago:

This is his latest article. He sent a grievance to DLANC that was literally about 40 pages about Dan Curnow being on a e-mail chain of people opposing the Skid Row NC. In order to file a grievance, you have to be a stakeholder of the place. He attached a page stating he is a stakeholder because he investigates the BIDS. I told everybody that he lives in Hollywood and works in Whittier and doesn’t own property here. I don’t think anybody even read his grievance.

So what would you do if you read something like this? Well, what I did is to turn the guy in to the Public Integrity Division of the Los Angeles County District Attorney for violating the Brown Act. Turn the page for details!

If you want to cut to the chase, you can get get a copy of the complaint here.

Therefore when Joshua Albrektson says “I told everybody that he lives in Hollywood…” he’s admitting to:

So that’s the argument. Let’s see what comes of it, shall we?

Image of DLANC dude Josh Albrektson is ©2017 MichaelKohlhaas.Org. It’s a transformative remogrifaction of this lil item right here. The words in the guy’s mouth are mostly his own, taken from this drivel and that slobber-cup and this bottomless well of idiocy, amongst other places.