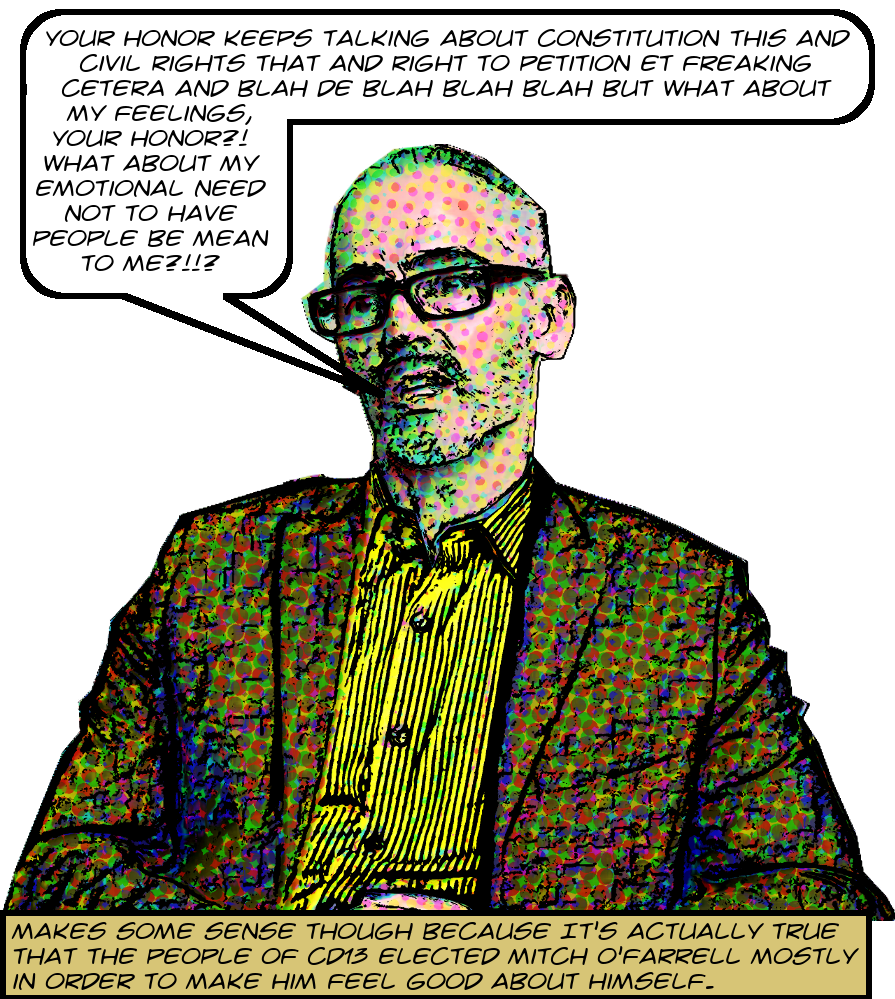 Mitch O’Farrell, the crying-little-babiest Councilmember in the whole City of Los Angeles, was soundly rebuked in his whiny ways by the California Court of Appeals, which last week issued an opinion reversing Superior Court Judge Elizabeth Allen White‘s dismissal of a lawsuit brought by the Beachwood Canyon Neighborhood Association against the City.1

The dispute was over a planning meeting sponsored by CD13 in 2014, from which Hollywood activists George Abrahams and Doug Haines of the Association were physically barred by then-CD13 director of planning (and self-confessed criminal) Marie Rumsey. As the ruling summarized the story:

Petitioners alleged that on June 26, 2014, [a Hollywood Design Review Committee] meeting was held at the office of Lehrer Architects “to discuss various projects proposed for Hollywood.” Abrahams and other members of the public went to the meeting location, but “were denied entry to the building.” Haines was also denied access, but he entered the room anyway. When Haines picked up a copy of the meeting agenda from a table, Marie Rumsey, planning deputy for CD13, “pulled the agenda from his hand and physically shoved him toward the exit.” Meanwhile, “Abrahams observed groups of lobbyists entering the building at will.”

So the Association argued that the meeting was subject to the Brown Act and that their exclusion violated that law. Furthermore, they argued that O’Farrell had exluded them based on the fact that they disagreed with his positions on various issues, which violated the First Amendment:

Petitioners also alleged that on January 15, 2015, O’Farrell said that people who tried to “crash” HDRC meetings in the past would not be allowed to attend future meetings. Petitioners alleged that O’Farrell was “singling them out because of positions they have previously taken on matters of public concern, and because they have previously been involved in litigation against the City of Los Angeles.”

O’Farrell’s position was that the meeting was private, was not subject to the Brown Act, and that therefore he could exclude anyone he wanted to. The case went through a number of highly technical twists and directions, very few of which I understand well enough even to summarize, and finally, in December 2017, Judge White declared a nonsuit, which I guess is essentially a dismissal of some kind, and it’s that declaration that was appealed here and reversed by the Appellate court.
END_OF_DOCUMENT_TOKEN_TO_BE_REPLACED