I recently obtained a few huge sets of records from the Los Angeles Bureau of Sanitation and wrote about them here. The most important record in the set, by far, is this 96 slide Powerpoint presentation from September 2019.1 The date is significant as that’s when,thanks to the indefatigable Services Not Sweeps Coalition, the City implemented a new and putatively more humane version of its encampment sweep policy.

The point of this training is to explain these new policies to the Sanitation staff responsible for conducting the actual sweeps, how they’re expected to behave, when to call in LAPD, and so on. In July 2020 the City Council apparently abandoned this ostensibly humane approach, with predictably appalling results, making at least some of the information in the Powerpoint file outdated, but the organizational information is likely to still be accurate. Also note that the claims about the City’s humanitarian goals were false at the time and by now they’ve actually dropped the pretense. So while it’s tempting to expose the hypocrisy in detail it’s not useful enough for me to spend the time on it.

But as I said, the organizational information is invaluable. In September 2019 there were 7 CARE+ teams assigned to Citywide operations. There were 3 assigned to A Bridge Home shelters, although this is likely to have changed with the addition of more ABHs. Finally, there were 3 assigned to the services zones in Skid Row, Venice, the Grand Avenue Corridor, and one to Downtown generally. There were 17 CARE teams, comprising one for each Council District, one for the River, and one Citywide team. This important slide shows which service centers the various teams are assigned to: 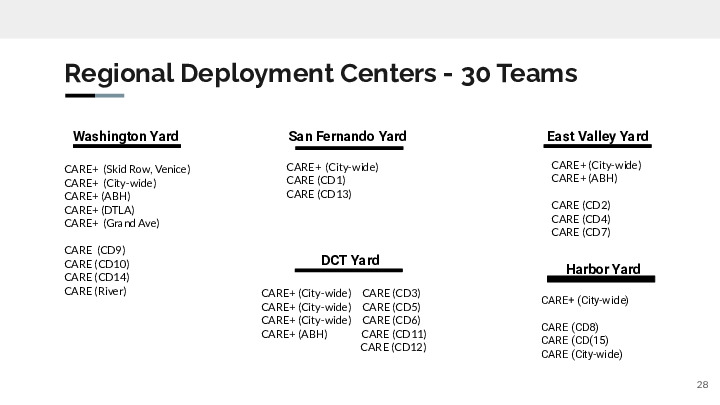 Also very useful are a series of slides explaining the operating procedures for both CARE (38 through 47) and CARE+ (49 through 57) teams. It’s hard for outsiders to keep the differences straight, although surely their duties have changed given City Council’s recent changes in policy.2 I was interested to see that ideally CARE teams start their sweep schedule at 8 AM whereas CARE+ starts at 7 AM.

Slides 58 through 63 explain what do do when encampment residents won’t cooperate with the sweep. Again, the offical procedures have probably changed, and the actual procedures were probably never like this, but there’s important information here about LA San’s mobile app, used by CARE/CARE+ staff to enter data about their sweeps. For instance, if an encampment resident “refuses to comply or work towards voluntary compliance” they’re supposed to note it in the app, tell the resident of the next sweep date, and explain what they have to do to “comply.”3

If there’s enough resistance to CARE team cleanups they’re allowed to call in a presumably more aggressive CARE+ team: “CARE teams may request a visit from a CARE+ team to improve site conditions by flagging the need for additional services by calling the UHRC.”

The Unified Homelessness Response Center only gets one slide (number 69), but at least for me it’s all new information. They interpret LAMC 56.11, the ADA, and presumably other relevant laws for the CARE/CARE+ teams on the ground. They also arrange for additional services as needed by the teams, like Animal Control or various mental health providers. 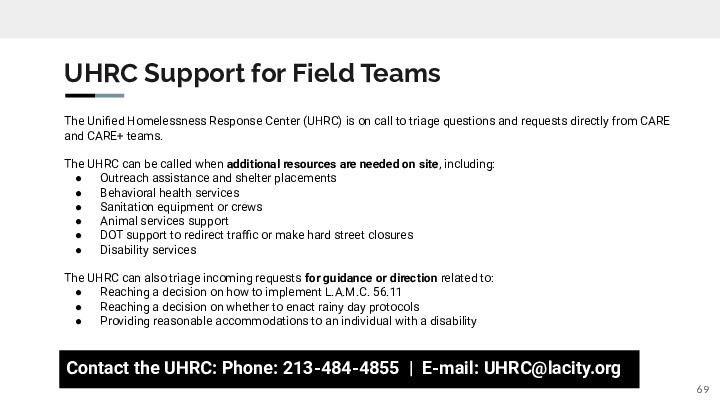 Also important is the description of encampment sweeps in the Special Enforcement and Cleaning Zones that surround the ABH shelters found on slide 71. They each have a dedicated CARE team which works the zone four days a week and one weekly visit from a CARE+ team. We learn from slide 75 that LAPD has 46 officers, which includes 4 sergeants, assigned to encampment sweep operations.

And finally4 the last four slides, 93 through 96, explain the roles of each staff member at an encampment sweep. Here’s a transcription with links to the slides. Also the entire set of slides, exported as JPGs, follows.

Homeless Engagement Team:
● Be the first point of contact with unsheltered population at each location, explain why teams are on-site that day
● Offer connections to services, shelter, and housing
● Provide guidance and expertise on productive engagement at each site to ensure that CARE team engagement moves people forward on their pathway to housing
● Advise on historical successes and challenges with engagement at each site
● Support LASAN in achieving public health goals
● Advise if teams should return another day

Environmental Compliance Inspector:
● Support LAHSA in making positive contacts with individuals at each location in service area
● Retain records of operations at each site
● Make final decisions on items to remain in public space, be placed into storage, or disposed of
● Clear all items for hazards
● Maintain radio connection with LAPD

LADOT Traffic Control Officers:
● Perform hard closures of the street when needed to designate working area for crews during CARE+ operations
● Assess the traffic patterns at the site to ensure team safety