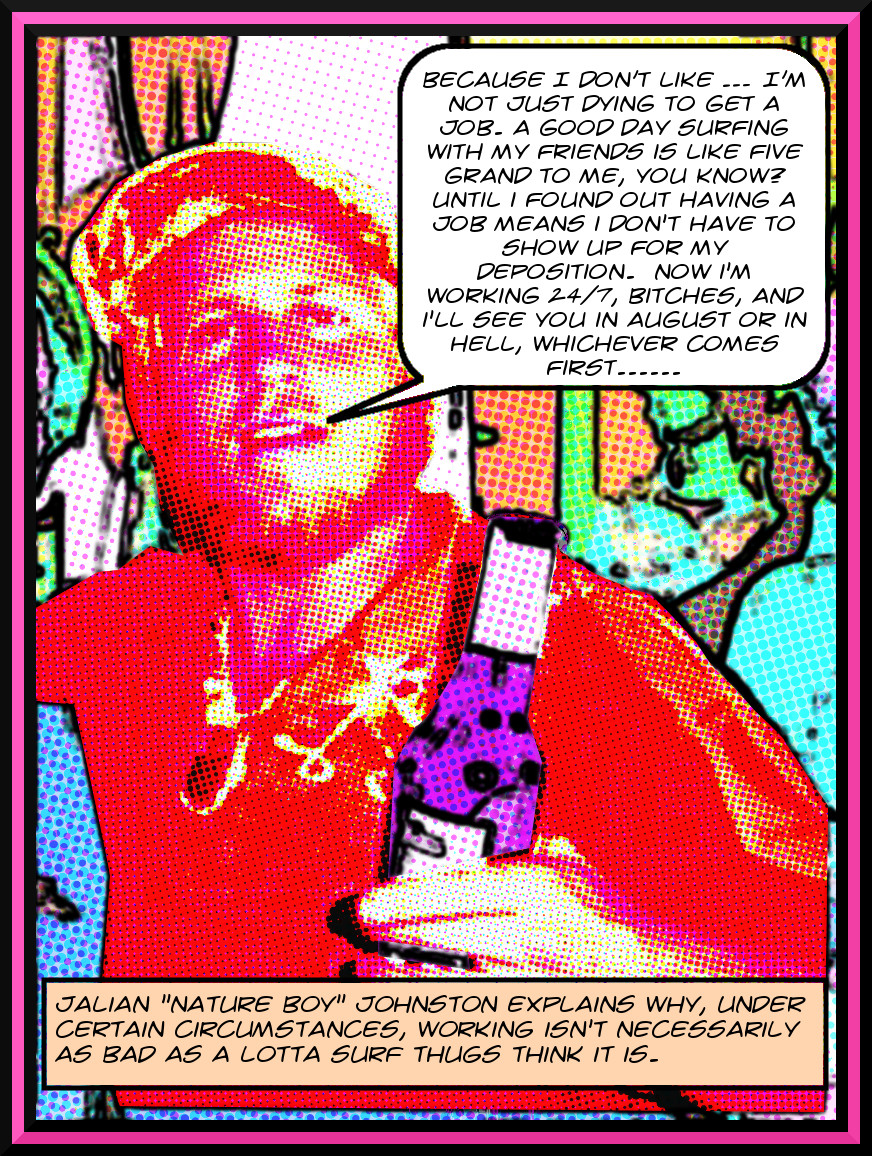 Perhaps you remember that just a couple days ago the Honorable Rozella Oliver, magistrate judge in the Lunada Bay Boys surf thuggery case, told the parties to quit their damnable antics and get defendant Jalian “Alan” Johnston’s deposition scheduled. At that time, she also told the parties that they’d better get together once more and try to figure this out on their own.1

Well, they met yesterday, and nothing got settled, so today plaintiffs’ counsel Lisa Pooley filed a letter brief with the court (transcription after the break, as always), explaining why they have been unable to schedule dude’s depo. It seems that, despite his intensely projected workshy go-with-flow SoCal surflospher image, Jalian Johnston is working too much to allow him to schedule a deposition.2

After weeks of back and forth, the plaintiffs have thrown their hands up in despair and asked the judge to impose sanctions if Jalian Johnston doesn’t make it to his properly noticed and scheduled deposition on Friday, June 30. You can read the painful details in the transcription after the break, but it’s much too stupid for me to summarize for you.

Later on June 7, 2017, Mr. Johnston’s attorney advised Plaintiff s counsel that Mr. Johnston was “booked for work through July” and “has a flight scheduled for August 17th.” Defense counsel stated that Plaintiffs could choose any date that week for his deposition.

On June 15, 2017, the Court held a telephonic hearing. After hearing from each party, the Court indicated that if Mr. Johnston was saying he had no date available for his deposition before the close of discovery, then Plaintiffs should proceed with noticing his deposition and, if Mr. Johnston did not appear as noticed, then Plaintiffs would need to follow procedures to compel his attendance. During the hearing, Mr. Johnston’s attorney clarified that Mr. Johnston is not an employee of VAST, but he is “sponsored” by this surf company. After the hearing, the Court issued an Order directing the parties to meet and confer in good faith and, if unable to reach a resolution, to schedule a telephonic conference with the Court.

On June 19, 2017, Plaintiffs’ counsel contacted Mr. Johnston’s attorney to inquire if he had communicated further with Mr. Johnston about his return. Defense counsel stated that Mr. Johnston “could not make it back for 6/30/17” and he was “still working on it.”

After Plaintiffs Requested A Second Hearing With The Court, The Parties Continued To Meet And Confer As Ordered

On June 26, 2017, Plaintiff s counsel contacted the Court to request a telephonic hearing concerning Mr. Johnston’s deposition. The Court issued an Order directing the parties to meet and confer one more time regarding this dispute and, if not resolved, to submit letter briefs to the Court. Later that day, Mr. Johnston’s attorney advised Plaintiffs’ counsel that he “mayhave Mr. Johnston secured for 7/28/27 deposition,” but he could not “100% confirm.” He said he hoped to hear from Mr. Johnston shortly. (Defense counsel made no further mention of Mr. Johnson’s “break in his schedule” on July 11.)

On June 27, 2017, the parties met and conferred again as ordered by the Court, but did not resolve the matter. Defense counsel proposed that Mr. Johnston’s deposition proceed on July 28, although he had not received confirmation from Mr. Johnston yet that he would return to the country for his deposition on that date. Plaintiffs’ counsel explained that waiting until July 28, even assuming that Mr. Johnston agreed to appear on that date, would put Plaintiffs at an unfair disadvantage given that: (1) Mr. Johnston’s testimony may be relevant and necessary to oppose the two defense summary judgment motions, which Plaintiffs have been advised will be filed against them (and which must be filed by July 24, but could be filed sooner) and (2) Plaintiffs likely would have insufficient time before the close of discovery on August 7, 2017 to compel testimony from Mr. Johnston, should they need to do so based on his responses at his deposition. Plaintiffs’ counsel proposed that Mr. Johnston appear at his deposition on June 30, as noticed, and, if he would not, then he appear for his deposition the following week, the week of July 3.

Conclusion And Request For Sanctions

Jalian Johnston image started out here and ended up where, when, and as you’ve found it. The present version is ©2017 MichaelKohlhaas.Org.